Parish Priest
Since the recent retirement of Fr. Bill, our Parish Priest is Fr David Manson. We have welcomed him to our school community to further develop our Parish and school links knowing that his guidance and wisdom are at the core of our school, from governor level down to interaction with the children in class, at assemblies and at school mass.

History of the Parish

The school is very proud to be part of the Diocese of Brentwood and Parish of Braintree. Our parish church is Our Lady Queen of Peace where the school often attends mass on holy days of obligation. Below is a short history of the parish.

The Catholic parish of Braintree was founded in July 1897 at the request of Cardinal Vaughan when Bridge House in Broad Road, Bocking, was bought by the Franciscan Nuns. Here the first Mass was said in a temporary Chapel on the 2nd October 1897. A new Chapel, designed by John Francis Bentley, the architect of Westminster Cathedral, was opened in October 1899. The Nuns vital contribution the parish included: setting up social evenings for Mill girls, a Mother’s guild, the original St Francis School, Residential Care for the Elderly, and providing Religious Education in Braintree and outlying villages including Dunmow, Great Bardfield and Halstead. 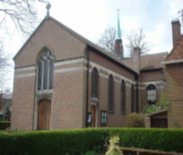 Mass. In 1937, a generous gift from Dr Richard Courtauld enabled the present parish church of Our lady Queen of Peace (right) to be built. Opened on the 31st August, 1939, it is believed to be the last church in Europe to be opened before the start of the Second World War. 1940 saw the erection of first church Hall constructed of two sheds donated by a local man. In 1953, following a further gift of money from Dr Richard Courtauld the Presbytery was built and on the 8th September 1954 Bishop Beck consecrated the Church.

The Church has three Stained Glass windows of particular note. The window behind the altar was provided by U.S. Servicemen who served in the area during the Second World War; the Polish Window was provided by Polish refugees from the same period and the window, at the back of the Church, depicting the Sacred Heart and the Holy Spirit in the form of a Dove was installed in 1967 as a tribute to Father Walsh who oversaw the Building of the Church and served the parish for 25 years.